PA Driver Clate Husted - Is This His HAULER TRUCK..???


23 replies to this topic

Am asking you to go back in time to the early 1970's and does anyone recognize the big truck pictured below...?   I bought this beauty from the Hagerstown Speedway some years ago and the Plessingers who own the speedway acquired the truck in 1976 as dated on the title.

Racer Tom Peck used the truck many times and told me that Clate Husted from Lewistown/Phillpsburg was the previous owner before the Hagerstwon Speedway got ahold of the truck.   Alan Sagi tells me Clate's car was a blue #68 car and they hauled it on this vintage truck.  Am told Paul Wagner also drove the same car if that might help track down someone from that era.

The truck is a 1966 Ford C-750 with a 391ci and a 10 speed rear end and it drives down the highway easy as pie at 70mph.  During it's time in service at the Hagerstown Speedway, NASCAR great Bobby Allison at times used the truck under the sponsorship of Mr Plessinger.

My biggest unanswered question is who owned the truck back in 1966 when it was first built...???  No one, and I mean no one knows anything about this mystery vehicle and it's early racing history and ownership.  I'm told that Holman Moody made a dozen of these haulers and they were given out like candy to Ford's racing teams of the day.  I've searched for 15+ years and the only photos I can find are from the 1980s... no photos from the 70's and zero anything from the 1960s.   Any productive direction would be GREATLY appreciated.

What an awesome piece.  How many miles are on it ?

What an awesome piece.  How many miles are on it ?

Only the Good Lord knows actual miles.  I know it's been to Daytona and Charlotte and probably everywhere else in between.  I've visited a lot of NASCAR racing forums and have came up  empty handed.  I'm heading to the drag racers community next and maybe they can shine a light on early ownership.

I will say driving the truck is a joy... no body bothers you.  The air horns is the cherry on top.

I believe it was Bobby Allisons at one time.  It was bought from him for Tom peck by Frank Plessinger  Owner of Hagerstown speedway.  And then Franks son Frank Jr used for a good many years.  Thus why it says P&W Excavating on it!

I've spent entire weekends clicking thru "old hauler" photo galleries and still zip on this truck.  Every little bit of effort is appreciated... on one of the links you provided I saw a C-Series painted in Porsche colors and logos go figure.

I believe it was Bobby Allisons at one time.  It was bought from him for Tom peck by Frank Plessinger  Owner of Hagerstown speedway.  And then Franks son Frank Jr used for a good many years.  Thus why it says P&W Excavating on it!

The info on Bobby Allison's race use is two fold:

A) We know he used the truck under the sponsorship of Frank Plessinger, as there are two photos below from the 1980's.   I spoke with Tom Peck for 30 minutes about the truck and he's confident that Plessinger bought the truck from someone up in middle Pennsylvania and the name Clate Husted was provided.

I asked Bobby Allison on the phone if he had any early photos of this particular car hauler of his and he started laughing and replied:  “We never photographed the haulers, it was about the cars, all about the cars”.  He can't remember much due to the accident.  I sent him a fax for reference.  His wife did say their truck was painted red/white with gold trim.  Well... this truck is red/white and has gold trim.  But I asked 3 different online forums per the Alabama Gang and no one has ever seen this truck in Alabama.  Bobby did have a large hauler but there are photos of that truck and it doesn't match in any way shape or form.

The title I signed showed the truck was purchased in 1976 by the Hagerstown Speedway.  I doubt there's anyway to track titles backwards...?  The only time Plessinger sponsored Allison on asphalt ( per my limited research ) was in the 1980's.  Two photos enclosed with Bobby Allison's #22 race car on the back of the big red truck.

The first photo is Franklin County Speedway in Virginia in 1983.

Second photo is Charlotte Motor Speedway on May 26th 1984.  Bobby won first place in this race in the Xfinity Series, Alsco Charlotte 300, driving his Oldsmobile #22.  He started in 8th position with a #1 finish. 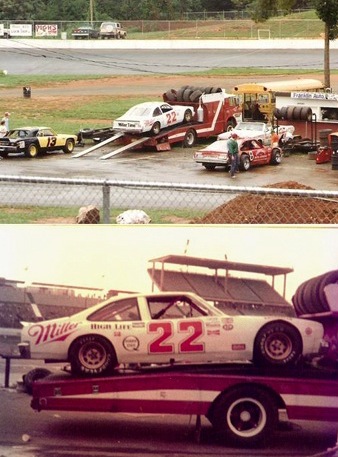 I've searched thru back postings in www.racestud.com and found this...

Is Spencer Husted a relative..?  Is Spencer still kicking, I would assume he would know a lot.

I've searched thru back postings in www.racestud.com and found this...

Is Spencer Husted a relative..?  Is Spencer still kicking, I would assume he would know a lot.

Spence is the younger brother of Clate. As far as i know he is still alive and lived in West Decatur, Pa. Hes probably around 80 years old now.

Truck was Red Metalflake when Peck got it

Truck was Red Metalflake when Peck got it

Frankie Plessenger told me there is what looks like Richard Petty Blue paint under the fenders... he was correct there's light blue on the cab and fenders but I've hammered the Petty fan base pretty hard running into dead ends.  I still need to contact Richard Petty and maybe he might remember something. 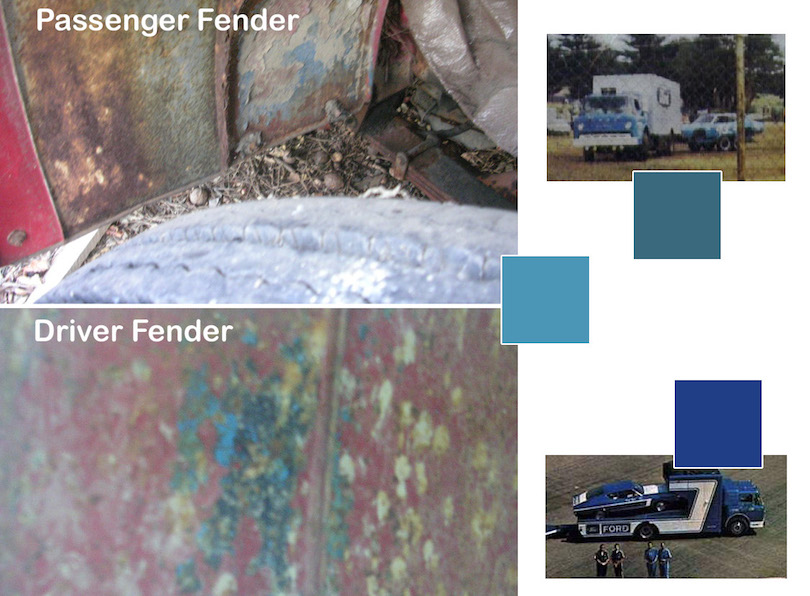 Sent you a pm

Since you know the truck was owned by Hagerstown Speedway have you tried contacting the MD DMV to see what info they can give you on the title history?

Since you know the truck was owned by Hagerstown Speedway have you tried contacting the MD DMV to see what info they can give you on the title history?

I've pondered that... but what could they really give me.   Most "privacy" laws would limit the info available. The best they could do is tell me what state the prior title was from.  I'm holding a Maryland title.  Also the "Marti Report" for Ford vehicles only covers passenger and not commercial.

In another twist... I read that Ford handed out a dozen of these ramp trucks in the middle 1960's to their race teams.  Am told some times they didn't get papers or titles... just a "Here's a big truck, now get moving and win some races."

If I can't shake some info loose from the fan base and former racers... I'll try to contact Ford in Dearborn.

Thanks for the interest,

On the vintage 1970's photo, and painted on the side of the truck is Stan's Exxon in Milroy PA.  Not sure if they were the trucks owner or just a sponsor.

I believe whoever owned the #68 Camaro, originally driven by Paul Wagner in Central PA., had the truck before Frank Plessinger bought it.  I can't remember the guy's name, but the #68 was a very competitive car, whether being driven byPaul Wagner or Clate Husted.  I may have a picture of the hauler at Port Royal from the 1970s that i took myself if I can find it.

Yes, thank you, that was the guy's name.

Update with great news... I can close the chapter on this part of my search as I know who owned the truck per the central Pennsylvania ownership era.

Stan Berich of Milroy Pa owned the truck, he also owned Stan's Exxon in Milroy Pa.   Have spoke with former wrencher Boyd Missed who worked with both Husted and Wagner and he remembers the truck was bought out of New York state.  Boyd is not certain but is pretty sure it was purchased from Maynard Troyer.  Chasing down the Troyer fan base is my next direction.

Thanks to everyone who chipped in and nudged me closer in my research effort...!!

Back to Oh/Pa Message Board


0 user(s) are reading this topic